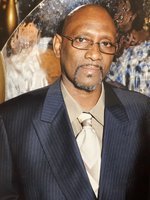 It is with great sadness that the family of Stanley Letcher announces his sudden passing. On Friday, January 8, 2021, Stanley Letcher entered peacefully and unexpectedly into eternal rest at his residence.

Stanley was born to Christine Curtis Letcher and Lehman Letcher on June 16, 1957, at Saint Jude Hospital in Montgomery, Alabama.

After Stanley graduated high school in the Bronx, NY he enlisted in the U.S. Marine Corp. where he served 5 years. During his time of service, Stanley received a Humanitarian Service Medal and a Rifle Expert Award.

After receiving an honorable discharge Stanley became employed at the VA Hudson Valley Healthcare Systems in 1986 where he dedicated 35 years of service as an Industrial Equipment Mechanic at the Montrose Campus.

Stanley was looking forward to retirement. He just wanted to sit in his chair and do NOTHING. He was so close....

Stanley is the tall, vocal, gentleman that formed bonding relationships with everyone he came in contact with. You always knew how he felt (Good or Bad).

Stanley would go out of his way to help anyone regardless of the situation. He would complain about it but he still did it out of love.

Stanley is survived by his mother Christine Curtis Letcher and his loving wife Shirrel Letcher of 22 years.

His siblings – Sisters Bernadette Letcher of Richmond, TX, and Donjette Letcher Gilmore of Alexandria, VA. His brother George Dewayne Letcher (Veronica) of Montgomery, AL, and a host of nieces, nephews, and in-laws.

Stanley has several close friends that he considered his brothers you all know who you are.

Thank you all for loving our Stanley.