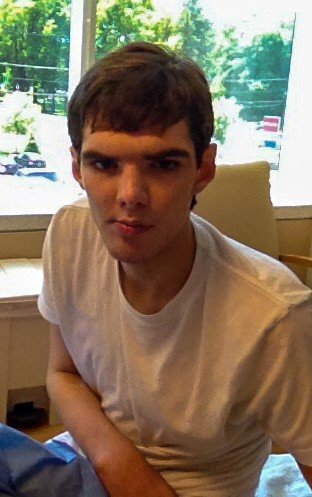 After a fierce battle, Conor McNulty, 27, passed away peacefully at Westchester Medical Center at 3:15 am on June 4, 2020, with his mother and father by his side.

Born at Albert Einstein Medical Center, Bronx New York on October 10, 1992, Conor came into the world during a difficult delivery which then included a stay in the NICU. As a toddler, Conor was diagnosed with Autism. Through the years he struggled to learn how to dress himself, eating with a spoon or fork, walking and communicating, as he was non-verbal. His perseverance was what made him a fighter. Every little step was a victory. At 15 Conor was diagnosed with Dup 15q Syndrome, a developmental disorder which for Conor included autistic characteristics and epilepsy, which helped to explain his difficulties.

Conor was a force to be reckoned with. For someone with an intellectual disability, he was incredibly smart!  He knew exactly what he wanted, usually food, and tried everything he could to get it, such as staring at people with big puppy eyes while dragging them over to what he wanted. And, no matter what store he was in, he knew in which aisle he could find his beloved Vanilla Oreo cookies. Whether he was watching scrolling movie credits, his favorite Barney and Wee Sing videos, or the lit candles on his birthday cakes, Conor’s fantastic smile always lit up the room.

During this past year, Conor put up a brave fight to stay alive. There were multiple times he recovered from near death. But this last time God called him home to be at peace for the first time in his short life.

From now until the end of time, the happy birthday song, car washes, McDonald’s strawberry ice cream sundaes, stencils, pincushions, whiffle balls with holes, and so much more will have a completely different and higher value than they ever did before.

Conor leaves behind his Mother, Patricia, Father, Eugene, his brothers Shane and Dylan and his sister Sarah. He is lovingly remembered by his Grandma Nadia, all his Aunts, and Uncles in America and Ireland, and his cousins both near and far. A special thanks goes out to all the earth angels in his life including, but not limited to, Gail Mohlsick, Mary Kate Magee, and Anica O’Connor- Montano. Thanks also to: Fred S. Keller School, Hawthorne Foundation, Devereux Foundation: West Chester, PA and Redhook, NY, Select Specialty Hospital, and Westchester Medical Center especially the ICU doctors and nurses and his medical aides Jahaira and Saiyi, and his program nurse Marie Bednarczyk. More thanks goes out to Nurse Kim Guzzo at Westchester Medical center who was there to support Conor and his family every day.

In lieu of flowers, the family of Conor McNulty suggests donations in his memory be made to Dup15q Alliance.

To send flowers to the family or plant a tree in memory of Conor McNulty, please visit Tribute Store
Print
Wednesday
10
June