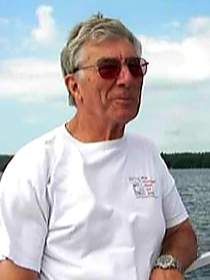 Robert Charles Englert (Bob), of Verbank, NY, passed away on Friday, May 22, 2020 at the New York State Veterans' Home in Montrose, after valiantly fighting a long illness.

Bob was born on March 7, 1936 in Ithaca, NY. He was the second of 4 sons of Raymond J. Englert and M. Starr Englert (nee Andrews) of Rochester, New York. His siblings included Bill, Jack and Jim. He is survived by Jack and his wife, Bonnie (Queensbury, NY), and Jim and his wife, Ellen (Rochester, NY).

Bob began his studies at Cornell University in Ithaca, NY and completed his undergraduate degree at the University of Arizona in Tucson, AZ. He earned a bachelor's degree in mechanical engineering in 1964. He served as a fighter pilot in the United States Air Force, including the Arizona Air National Guard, from 1956-1966. He also served in the Marine Corps Reserve from 1966-1968.

He married Lillian Marie Mansour of Mesa, Arizona in 1961. Bob's daughters, Diane and Cynthia, were born in Tucson. In 1966, Bob began his long career as a commercial airline pilot with Pan American Airways in San Francisco, California. His son David was born in Redwood City, CA.

Bob and his family moved to Connecticut in 1970, where he was based at JFK airport in New York City. In 1986, he began flying for United Airlines. Bob retired from United in 1996, however he never gave up his greatest passion - flying. He built and flew several small airplanes out of Sky Acres Airport in Lagrangeville, NY. He was also an avid outdoorsman and dog lover.

Bob is survived by his wife Lillian of Danbury, CT. He is also survived by his 3 loving children, Diane Christian (Mike) of Marblehead, MA, and Cynthia Whitehouse (David) and David Englert (Jennifer) of Ridgefield, CT. He also had 5 grandchildren and 3 step grandchildren, as well as many cousins, nieces and nephews, all of whom loved him dearly.

Due to the national health crisis, a memorial service for Bob will be held at a future date to be announced.

In lieu of flowers, memorial contributions may be made to Guiding Eyes for the Blind, 611 Granite Springs Rd, Yorktown Heights, NY 10598 or at GuidingEyes.org.

Arrangements are under the care of the Joseph F. Nardone Funeral Home, 414 Washington Street, Peekskill, NY.

To share a memory or offer an online condolence, please visit www.nardonefuneral.com.