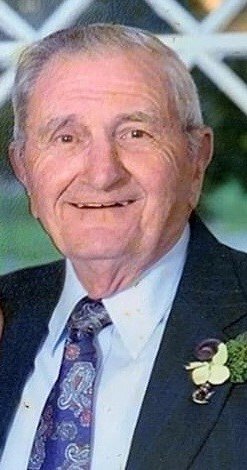 Sylvester Pascale, age 95, of Beacon, formerly a longtime Peekskill resident, passed away on Monday, June 29, 2020, at his residence.

He was born on Monday, September 29, 1924, in Peekskill, the son of Sylvester and Josephine Del Mastro Pascale. He was employed in the Records Dept., at the FDR Veterans Facility in Montrose, retiring in 1975.

Sylvester was a Veteran of the US Navy, serving during World War II. He served in the Mediterranean theatre and North Africa (Libya and Tunisia).

On November 16, 1947, he married his High School sweetheart Constance Menga at the Church of the Assumption. Constance passed away in 1989.

Sylvester was an avid golfer, with several Hole in Ones to his credit.  He even achieved his goal of scoring his age when he was 78 years old.  He enjoyed horse racing, trips to the track and casino, and dining out with his family at his favorite Italian restaurant. He was known by many as “Pop,” a name given to him when he became a grandfather for the first time.

He is survived by his 2 sons, Sylvester (Mary), Pascale, of Chicago Park, CA, and Charles (Regina) Pascale of Clifton Park, NY; also his companion, Frances Templeton, of Peekskill. He also has 5 grandchildren, Melinda (Craig) Russell, of Chappaqua, and Matthew (Christine) Kmetz, of Armonk and Brendan Pascale, Jonathan (Maddisen) Pascale, and Hayley Pascale, all of California.  He has 4 great-grandchildren, Charlotte Russell, Caitlin Kmetz, Keira Kmetz, and Manuka Pascale, as well as several nieces and nephews.

Besides his wife, Connie, he is also predeceased by a daughter, Susan Kmetz, and a granddaughter, Sara Pascale, as well as his brothers and sisters, Frank, Harold, Sam, Sal, George, Jim, Pat, Fieo, Anthony, Rose Manzi, Carmella Ross, and Mary Agor.

To send flowers to the family or plant a tree in memory of Sylvester Pascale, please visit Tribute Store
Print
Monday
6
July