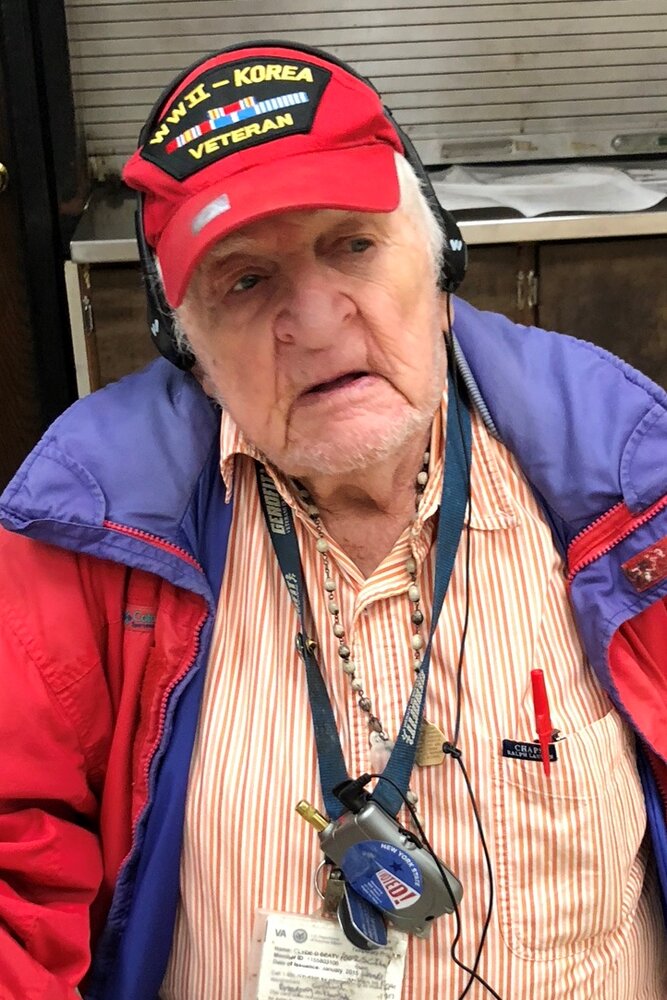 Please share a memory of Clyde to include in a keepsake book for family and friends.
View Tribute Book

Grandpa Clyde is lovingly remembered by his family. His daughter Deborah dedicated herself to his care in the last years of his life and they shared a love of nature. He was passionate about bird watching, gardening (especially roses, dahlias, and chrysanthemums), and reading. His bookshelf always included US Marine Corps history, Cervantes, John Steinbeck, and Shakespeare. On his desk when he died were two photographs. One of Clyde’s sons Michael with Clyde’s great-grandson Bryce and a second of Michael’s wife Pamela Conely with Clyde’s great-granddaughter Emerson. Clyde spoke so fondly of his years living with Michael and Pam in Idaho hiking and exploring with their dear friend Joel Klingensmith and spending time with his granddaughters Anna and Althea. Clyde was very proud of Anna and Althea, often talking of their intelligence, humor, and care for their grandmother, Beverly.

Clyde’s love of John Steinbeck was likely due to his own childhood. Clyde was born in 1929 in Skiatook, Oklahoma. Clyde’s own father died in 1943 after serving in World War I. Clyde had two siblings, Mary Lillian and Joseph David (“Joe Dave”). He often spoke of their adventures together in Albuquerque. Mary remarried Art Bogart and they had two children, Rebecca and Ina. Rebecca and Ina remember their older brother Clyde’s cherished visits with their mother in Albuquerque. Clyde was very dedicated to his mother, Mary, and her resilient spirit. On his visits to Albuquerque Clyde also made a point of going to El Modelo for tamales and posole.

Clyde joined the Marine Corps at the age of 16 and was wounded in action in the Korean War. He retired from service in 1951 and was awarded the Purple Heart. Clyde was a spiritual man who had a close connection with God. He would often pray the rosary for various family members who were going through difficult times. On the lapel of his suit were his 1st Marine Division pin and a dove representing the Holy Spirit. Clyde’s relationship with God also came from his experiences with Alcoholics Anonymous. Clyde helped countless newly sober people find the strength and fellowship of AA. He was blessed with 50 years of sobriety.

After raising his children in California and New York, Clyde and his wife Beverly Bruska Beaty moved to Maine. Clyde treasured his visits from his grandson, John when they would toboggan and explore the Maine woods. In his later years, Clyde enjoyed visits to New Jersey to see his grandson’s two children, Saoirse and Graham.

In the 1980s, Clyde moved to Guatemala to work in orphanages teaching English and cooking. He told stories of traveling throughout Guatemala sharing his love of music, film, and dance with the children he worked with. In 1995, Clyde moved back to the United States to live with his daughter and granddaughter, Katharine. Katharine’s most treasured memories are of going with Grandpa Clyde to the library and art museums and his visits with her children Sebastian and Elliot.

Clyde’s spirit will live on in so many. He truly loved all those whose lives he touched. The family will bury Clyde, per his wishes, at Arlington National Cemetery. Condolences may be offered at www.nardonefuneral.com.

In lieu of flowers, the family is asking for donations to Hospitalito Atitlan (www.hospitalitoatitlan.org) or Casa Guatemala (www.casa-guatemala.org).

To plant a beautiful memorial tree in memory of Clyde Beaty, please visit our Tree Store

A Memorial Tree was planted for Clyde
We are deeply sorry for your loss ~ the staff at Joseph F. Nardone Funeral Home
Join in honoring their life - plant a memorial tree
Services for Clyde Beaty
There are no events scheduled. You can still show your support by planting a tree in memory of Clyde Beaty.
Plant a tree in memory of Clyde
Print
Online Memory & Photo Sharing Event
Online Event
About this Event