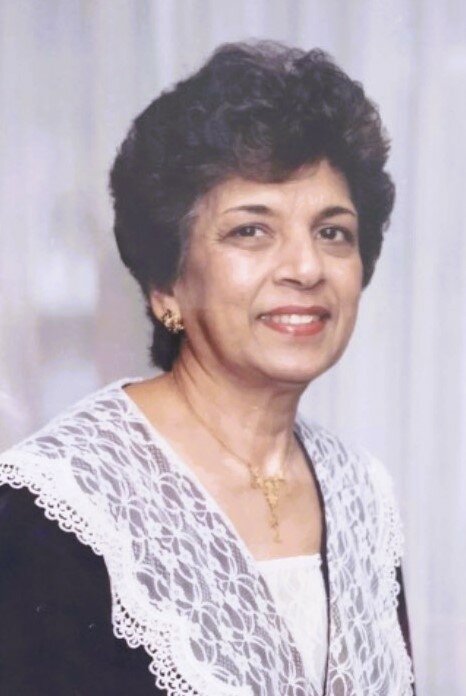 Please share a memory of Honor to include in a keepsake book for family and friends.
View Tribute Book

Honor Carol Ackbarali was granted her final wish and passed peacefully into eternal rest at her home, on Wednesday July 13, 2022 after a long and fulfilling life.

Carol was born on March 6, 1930, in San Fernando, a very small town on the Caribbean island of Trinidad, to Raphique Rahamut and Ivy Ramdial.

Carol was a Personnel Administrator for seven years at Barclays Bank International before being promoted to Manager of Benefits & Compensation and Assistant Vice President of Bank Sourcing & Facilities, until she retired in the mid ‘90’s. Carol was always recognized for her exceptional organizational & planning skills, and she combined those skills with her fastidious attention to detail and excellence, to guide both her professional and her personal lives.

Carol defined herself not only by her profession as a Bank Operations Administrator, but very much as a Wife, Mom and Grandmother, and as a devout Roman Catholic. She later became a Eucharistic Minister at Saint Christopher Parish Church in Buchanan, NY.

One of her signature traits was afternoon tea. Whether she was entertaining or just enjoying a quiet afternoon on her back porch, Carol’s “signature” cup of tea and accompanying sweet treats were always present. She thoroughly enjoyed sipping tea while admiring her garden and the beautiful wildlife in her area.

Carol was the spark that led her family to migrate from the small Caribbean island of Trinidad first to St Thomas USVI, and next to New York between 1970 and 1974. Her joys in life included reading (among her favorite books were her bible and nature and tea magazines);  spoiling her “adopted” son Michael who we all still think of as a brother; planning & hosting very large family gatherings (which was a trait Carol inherited from her mother); and she really loved gardening and traveling. One of her biggest joys was when she and Ozzie arranged to be in London for the marriage of Princess Diana and Charles in July 1981.

Carol used every opportunity to help her Church and Parish, and this continued until her health could no longer support her indomitable spirit of giving.

Carol is predeceased by her husband Oswald (Ozzie); her parent's Ivy (Ramdial) and Raphique Rahamut; her sisters Madge and Molly; her brothers Kenneth (Sheila), Leslie (Dhropatee), and Patrick (Anne).

Please use the link below to view the Mass of Christian Burial. The link will be active beginning at 9:45 AM on Saturday, July 16, 2022.

To send flowers to the family or plant a tree in memory of Honor Ackbarali, please visit Tribute Store
Print
Friday
15
July