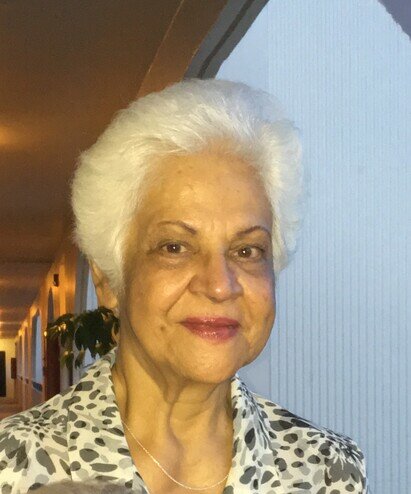 Please share a memory of Beatrice to include in a keepsake book for family and friends.
View Tribute Book

Beatrice (Betty) Philomena Benson ascended into the eternal realm on September 29, 2022. She
was at her home surrounded by her loving family.

Born in Kuala Lumpur, Malaysia on September 11, 1937, Betty was the daughter of the late
Anthony John and Margaret Grey Monteiro. Betty obtained her teaching degree from Teacher
Training College Kirkby, Liverpool in the United Kingdom in 1957. She returned to Malaysia
and started her first teaching post in Jasin, Malacca where she was introduced to the Bahá'í Faith
in early 1958 by artist Tusha Kanti Paul and shortly after declared her belief in Bahá’u’lláh.
Enflamed with the love of Bahá’u’lláh, her life became singularly focused on the advancement
of His Faith throughout the world.

During the early years of the development of the Bahá'í community in Malaysia, Betty and her
husband, Tony Fernandez, served on various Bahá'í administrative bodies, including the Local
Spiritual Assemblies of Malacca, of Bagan Serai, and of Petaling Jaya. She was appointed an
Auxiliary Board Member for Western Malaysia in 1970. She continued working as a teacher
until 1964 and then became a Tupperware manager.
In 1973, after a divorce, Betty moved to Western Australia with her daughters, Shirin and Zeena,
where she worked as a teacher at Melville Primary School in Perth. She served on the local
Spiritual Assembly of South Perth and later was appointed as an Auxiliary Board Member for
Western Australia from 1977 until 1988. During her Australian years, she visited and worked
with Bahá'í communities throughout Western Australia, especially venturing out into the outback
regions of the Kimberley, the Pilbara, the Gascoyne, and the Goldfields.

In 1988, she began traveling to regions in the Pacific, spending time in Fiji, Tonga, Yap, and
Palau. During this time, she met Richard Benson, a Baha’i who resided in Chuuk and who served
on the Supreme Court of the Federated States of Micronesia. The following year, Betty married
Richard and moved to Chuuk. From this point on in her life, she worked full-time with Bahá'í
communities. She served on the National Spiritual Assembly of the Eastern Caroline Islands and
then on the Continental Board of Counsellors for Australasia from 1991 until 2011, working with
Bahá'í communities in the Pacific and beyond.

When her dearly beloved husband Richard became seriously ill in the last years of his earthly
existence, Betty lovingly and selflessly took on the role of primary caretaker. After Richard’s
passing on November 17, 2021, she accepted an invitation to live with her daughter’s family and
moved to Croton-on-Hudson, New York in August 2022. It was from here that, on September
29, 2022, she winged her flight to the realm above surrounded by her loving family.

Wherever Betty lived, her home was always open to everyone, was always a center of hospitality, warmth, encouragement, and love.

Her indomitable courage, unswerving dedication, and gracious hospitality inspired countless souls across several continents and the vastness of the Pacific.

Betty, who was deeply dedicated to her family, was preceded by her brothers Michael Joseph
Monteiro and Noel Boniface Monteiro, and her sister, Eliza Diane Warren.

In her final earthly days, Betty looked forward to the next stage in her soul’s eternal
journey—meeting her loved ones in the imperishable dominion, the pavilion of eternity, the
immortal, infinite realm.

The honour and distinction of the individual consist in this, that he among all peoples should
become a source of social good.
-- ‘Abdu’l-Bahá

A Memorial Service will be held on Saturday, October 1, 2022 at 10:00am at Joseph F. Nardone Funeral Home, 414 Washington Street, Peekskill, New York.

To view the service via Zoom please Click Here.  The link will not be active until just before the service begins.

In lieu of flowers, donations in memory of Betty may be made to The New Era Creative Space