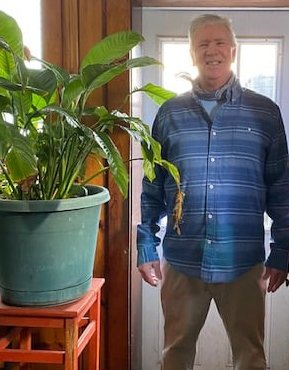 Dave's family moved to South Yonkers N.Y in 1966, where he resided until he married Kathleen in 1988 and they made their home in Peekskill N.Y., where they raised their family.

When Dave moved up to Yonkers he was already a working man at age 14. He had a paper route in Sky View Apartments in Riverdale, NY. The first friend Dave made when moving to Yonkers was Michael Warnock (predeceased) (Kathleen's older brother) who was a few years Dave's junior. And so began a long friendship and relationship between the Warnock and Egan clans. Dave often recounted this story about meeting Mike.

Dave was a hard-working blue-collar man. He took pride in his work. He eventually was employed as a driver for UPS where he worked until he retired in 2014. He was a man who liked to keep all things simple. He was not big on drama.  He always started his day, working and retired, with a prayer of gratitude and thanks for all he had been gifted and given in his life. He often referred to himself as the luckiest man in the world, or he'd say to me, "who's been luckier than me?"

Dave was perhaps the biggest Yankees fan who ever existed. That was his team. His passion for baseball carried over to coaching many peers of his own children throughout many years with the Peekskill Lapolla Little league. He was well respected by his own peers as a coach. But even more importantly, he was well respected by the many children he coached. He impacted their lives in positive ways because he respected all of those children as much as they did him.

Dave was loved by many. His friends were countless. People really liked him. He was a good man. That may be a simple sentence, but oh so profound. That's a legacy in and of itself.

My children and myself will be lost without him, but in honor of the spirit in which he conducted his own life, we will go on, and try to be as good men and women as he always was. He wouldn't want it any other way. We all love you more than any of these words can say. You will be missed.